Governments across the region have adopted austerity measures, giving rise to social discontent, particularly in the education and health sectors. But public sector workers are not willing to let go of their pensions and other social benefits and in recent months hundreds of thousands of protesters have reclaimed the streets against governments in central and south America. 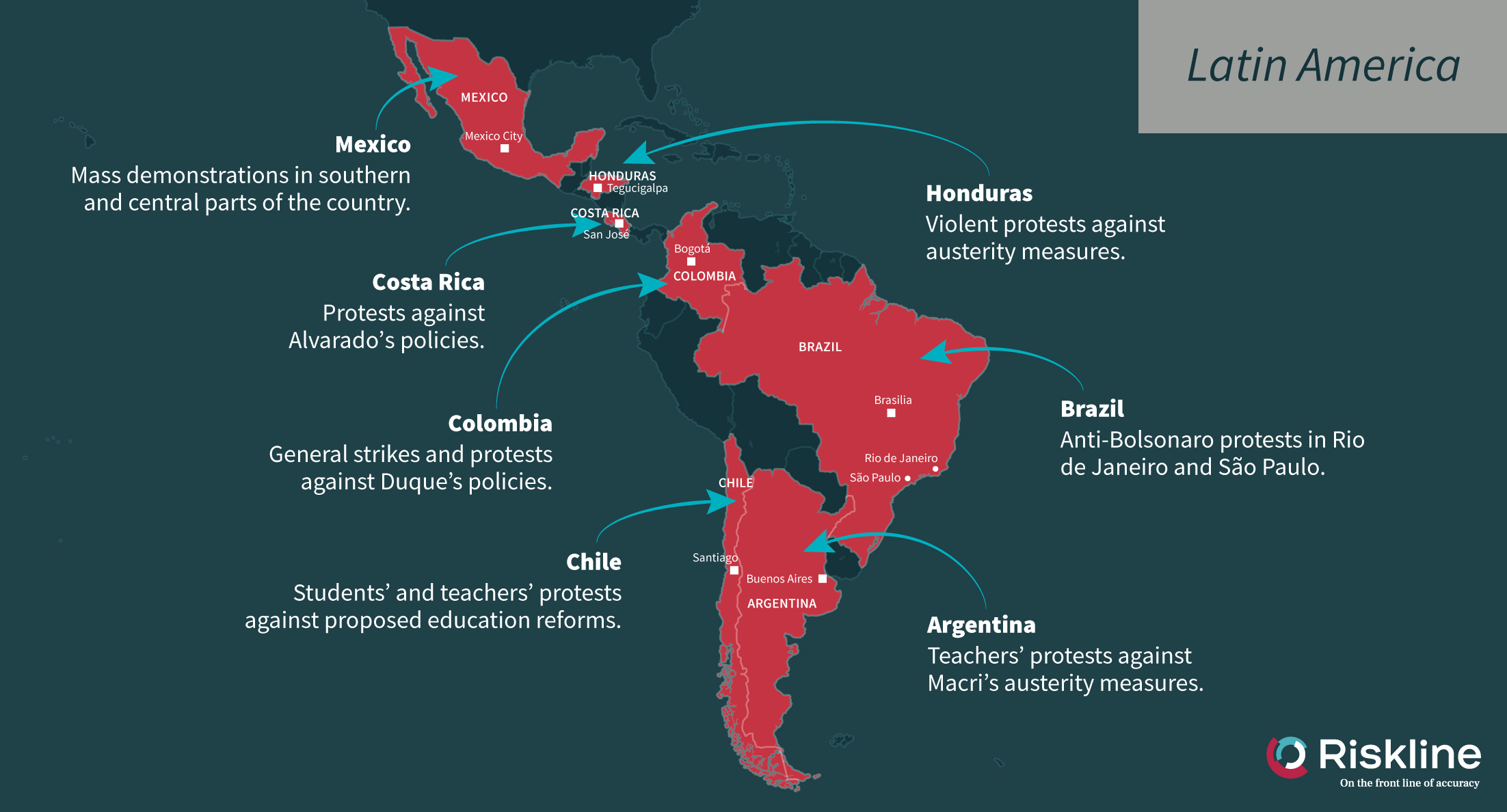 Following a period of economic growth that enabled expansion of social programmes, falling commodity prices and investment rates coupled with high social spending led to economic stagnation in Latin America. Rising populist and autocratic tendencies further diminish prospects for growth in the region. To please international funders, governments across the region are taking austerity measures, giving rise to social discontent, particularly in the education and health sectors. Public sector workers are not willing to let go of their pensions and other social benefits, not to mention jobs, amid privatisation initiatives. In recent months, hundreds of thousands of protesters have reclaimed the streets against the right-wing governments of Jair Bolsonaro's Brazil, Sebastián Piñera's Chile, Iván Duque's Colombia, Mauricio Macri's Argentina and Juan Orlando Hernández's (JOH) Honduras, as well as centre-left governments of Carlos Alvarado's Costa Rica and Andrés Manuel López Obrador's Mexico.

In Brazil, funding cuts to public education and Bolsonaro's pension reform plan have triggered mass protests across the country, including in Rio de Janeiro and São Paulo. On 14 June, a nationwide general strike - first since 2017 when the government sought to loosen labour laws and cut pension benefits - paralysed transport in major cities as several people were injured in clashes with the police. General strikes, violent protests and adjacent transport disruptions have also been observed in Colombia, where Duque's government has proposed similar education and pension cuts; in Argentina, where tens of thousands of teachers have marched against Macri's austerity measures; and in Costa Rica, where Alvarado's government plans to introduce dual education programmes, limit civil rights, increase the tax base and reduce pensions. Similarly, in Chile, both students and teachers have protested over Piñera's education policies, conditions at schools and a recent decision by the country’s constitutional court to overturn a law that prohibited for-profit companies from controlling universities. Chilean teachers also demand an end to what they believe is excessive evaluation of teachers. The same reason has triggered mass-demonstrations and major rail- and roadblocks across southern and central Mexico. The most intense demonstrations have rocked Honduras, where striking teachers, students and health workers have held mass protests since late April to denounce two laws aimed at facilitating mass layoffs in the public sector and privatising education and health services as demanded by the International Monetary Fund (IMF). At least three protesters have been killed and over a dozen others injured amid violent clashes since 19 June. Calls by JOH for a national dialogue have gone unheeded by the demonstrators who have lost their faith in the government's ability to deliver inclusive development - similar to protesters elsewhere in the region.

It would be shortsighted to think that these protests will abate soon. Student and teacher movements are among the strongest elements of civil society in Latin America: they are able to call for strikes and protest action in diverse sectors, including transport, as has already happened in Brazil, Costa Rica and Honduras. Amid austerity and an economic downturn, demands to combat indebtedness, increase education funding and end attacks on basic rights - coupled with teachers' struggles over salaries, benefits, pensions and work conditions - are only likely to trigger further demonstrations and travel disruptions across urban hubs of Latin America in the near- to medium-term, with new protests already planned in Tegucigalpa, San José, and other cities in the region. 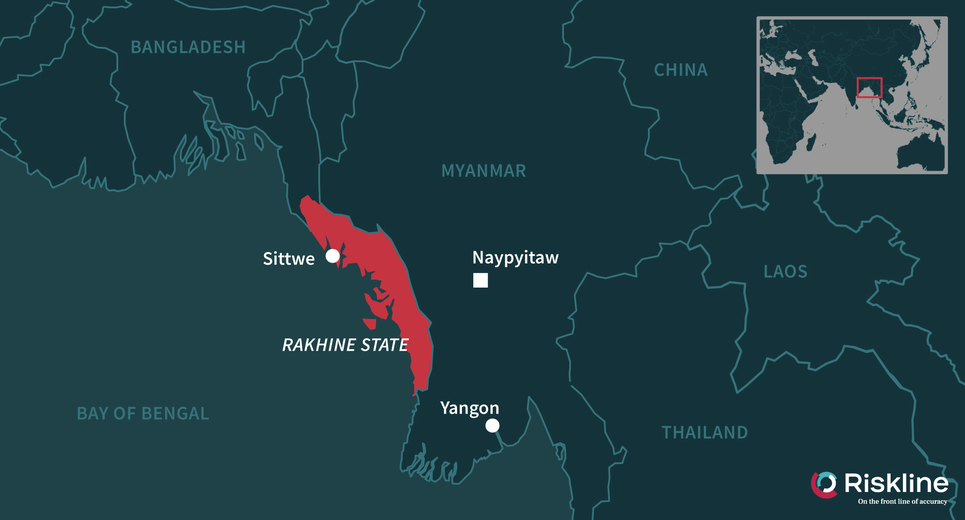 The conflict in Rakhine state: Is Myanmar's military fighting a losing battle?

Heavy fighting in Rakhine state between the Arakan Army and Myanmar's military – that has largely fallen under the international radar – is developing into an open-ended military conflict that has the potential to destabilise the country. 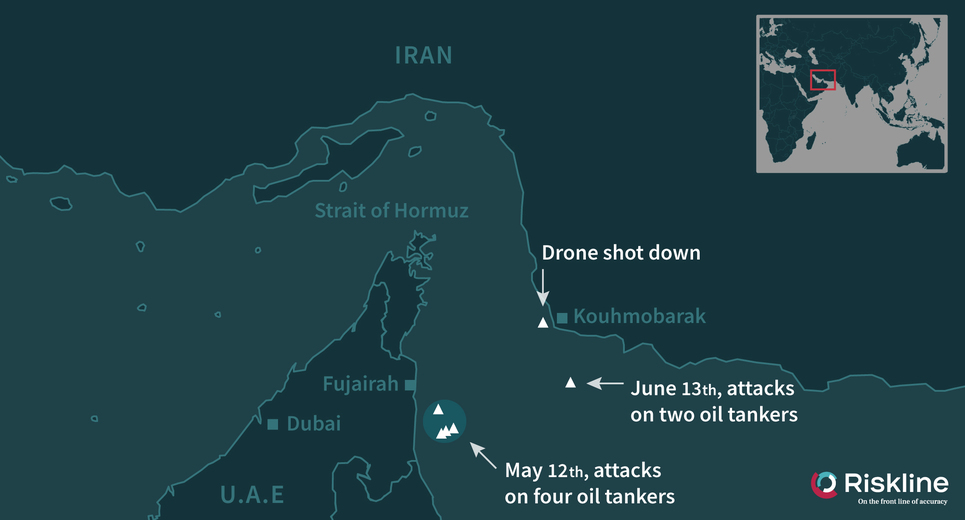 While neither the United States nor Iran seeks to initiate a war, Iran is prepared to absorb the blows of a short-term conflict with the United States unless the international sanctions regime against the Islamic Republic is rolled back.