In times of elections or unrest, African countries are increasingly darkening on the global map of the Web, disappearing for days – even weeks. The cutoff of all telecommunications has emerged as an effective and fashionable part of the arsenal of African regimes that fear popular uprisings and international discontent. 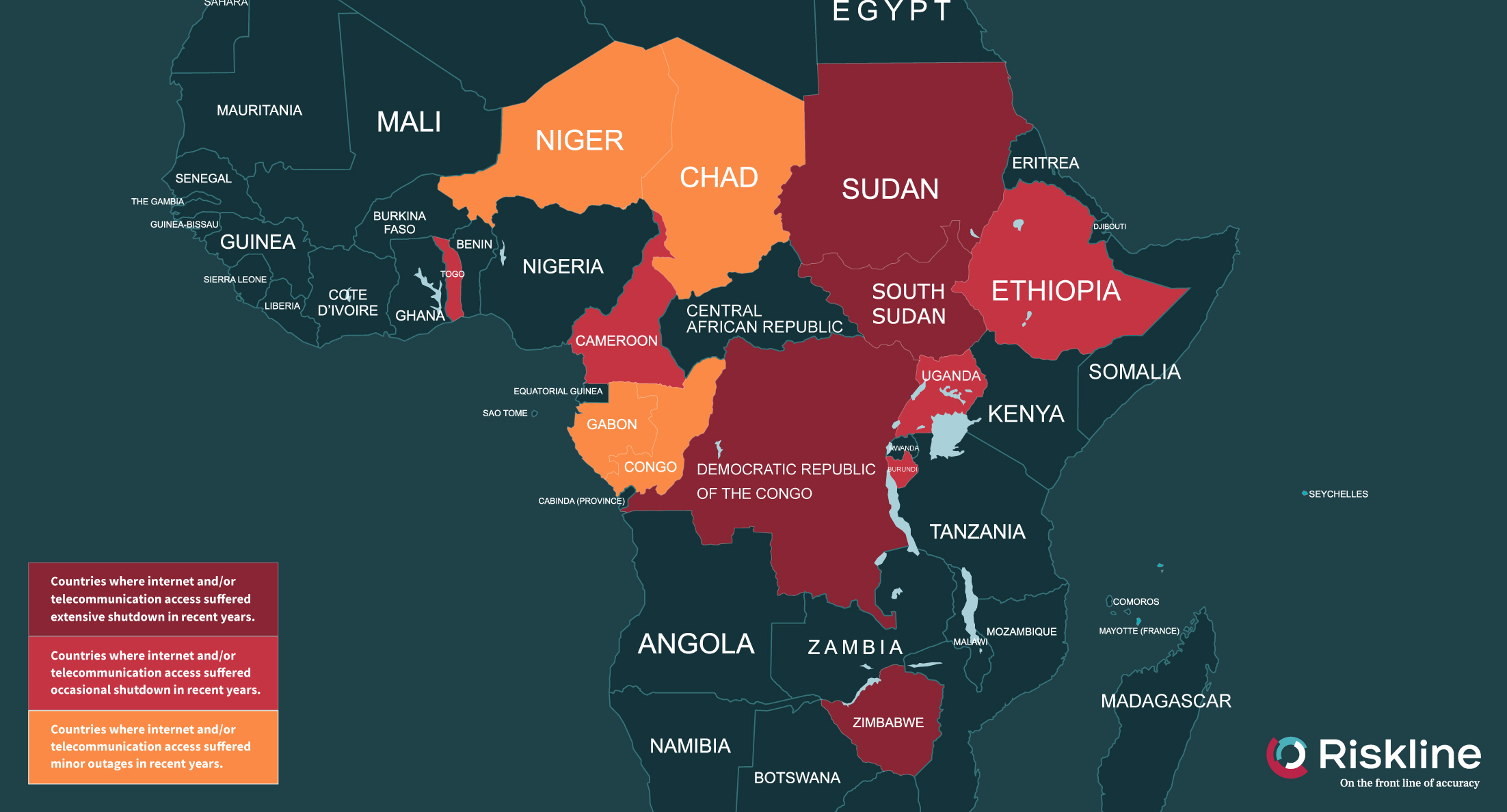 A feeling of cyber brutality transpires. In 2018, at least 21 full or partial internet shutdowns were recorded across the African continent, with another 13 the year prior. The shutdowns seem, in part, a reaction to the web’s growing reach across a continent that remained largely offline only a decade ago. While this practice dates back several years, it seems to be accelerating. The expanding reach of the internet means it has become an important tool for social change, prompting governments to take extensive and bold action in a last attempt to muzzle it, a move that risks unanticipated consequences.

Since January 2019, five African governments – Cameroon, Zimbabwe, Gabon, the Democratic Republic of Congo and Sudan – have temporarily shut down internet or text messaging service access amid national political crises and associated unrest. In Chad, social media has been blocked for over a year and counting. What these countries have in common is recent or ongoing political turmoil. Between contested elections, violent anti-government protests or attempted coup d’états, stopping the flow of information is the main purpose of the shutdowns. The web has become the new battlefield for opposition militants who use the internet and especially social networks to mobilise and propagate information. With consistently rising numbers of internet users in Africa, information can travel at an alarming – almost uncontrolled – speed. In response, reactionary shutdowns are quite straightforward: governments must simply tell national internet providers, most of which are government-owned, what to block. Yet, this not only hinders the organisation of the political opposition or agitated populations, but also helps control the government's narrative in the media and across the international community. Concurrently, the market for tools to monitor and spy on the digital activity of citizens and administration personnel has soared in the recent years, mostly for Chinese, Israeli or Russian companies in the cyber-espionage industry. For instance, former Zimbabwean leader Robert Mugabe reportedly acquired International Mobile Subscriber Identity (IMSI) catcher devices to intercept and geolocate telecommunications during his presidency. Several other countries, including Tanzania, Ethiopia, Cameroon, Rwanda and Sudan, are also known to have used such services. For many regimes, the transparency and rapidity linked with unchecked internet and telecommunication access could come at the cost of their governing power, which they hold on to tightly.

Nevertheless, while government officials justify the locking down of digital territories in times of popular unrest through the lens of public safety, protection of law and order, control of misinformation and even fighting terrorism, the consequences can be be swift and dramatic. Cutting internet services comes at a high cost for the countries’ emerging digital economies. It leads to disruptions in information networks – including internet-accessible stock and commodity prices indices – and to the unavailability of e-commerce, mobile payments and electronic banking, which have boomed recently in Africa. The costs of blocking internet and telecommunication access will only rise as the digitisation of critical systems continues. In seven African countries surveyed in 2016 by the Brookings Institution think tank, temporary internet shutdowns amounted to economic losses of around 320 million dollars in revenue; a nationwide internet blackout costs approximately 5.7 million US dollars a day for a country like Zimbabwe, which is already economically unstable.

With multiple major elections looming in 2019, internet or telecommunication shutdowns in several countries are possible, carrying severe consequences nationally and internationally for democratic institutions as well as general trust in government leaders. Aside from affecting individual users and social circumstances, the shutdowns would also have a significantly detrimental impact on economic activities. The percentage of the population with smartphones has doubled since 2014, and another 300 million people are expected to come online in the next seven years. As the digital economy expands in developing countries, it will become increasingly expensive for governments to shut down any type of communication systems, with damages likely to accelerate in the future and further weaken an interwoven global economic development. 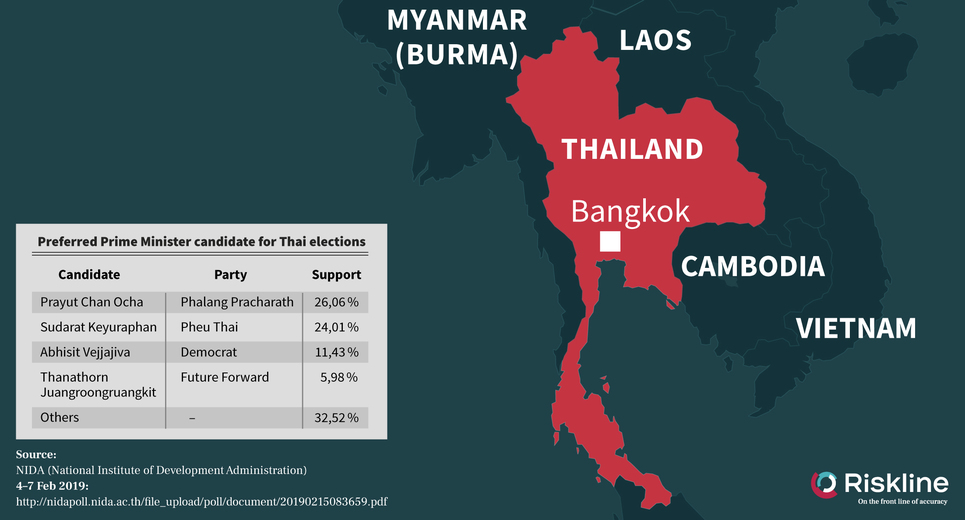 After much postponement, Thai elections will take place on 24 March. However, it is unlikely that the outcome will dilute the military’s role in governing the country, as constitutional and electoral provisions will ensure it will continue to dominate the country’s politics for the foreseeable future. 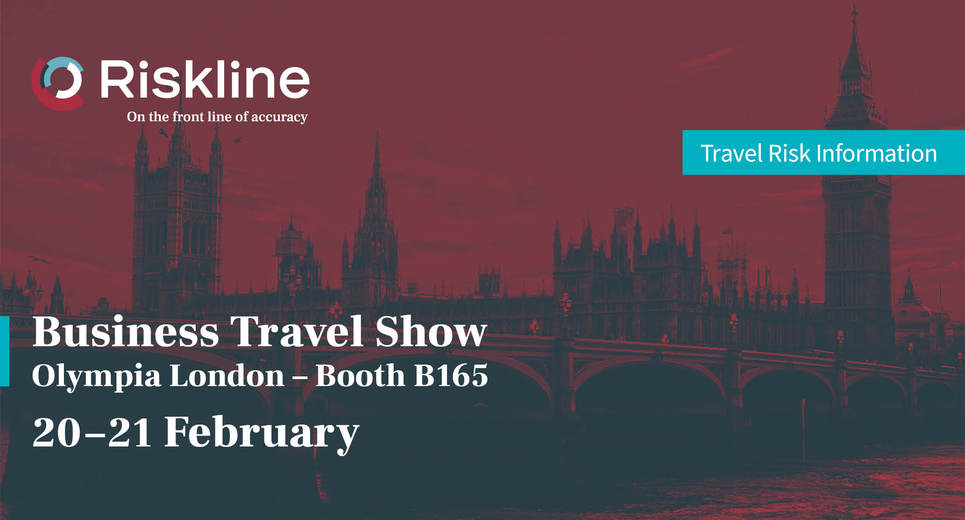 Riskline is pleased to attend the Business Travel Show 2019 in London from 20 to 21 February.